They´re a New Orleans specialty.  They´re delicious. The people at Central Grocery on Decateur claim to be the originators, since 1906. 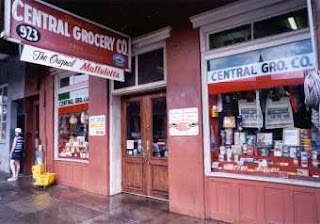 Italian immigrant, Signor Lupo Salvatore, owner of the Central Grocery, started making the sandwiches for the men who worked the nearby wharves and produce stalls of the French Market. The sign over the covered sidewalk proudly proclaims, home of “The Original Muffuletta.”

Marie Lupo Tusa, daughter of the The Central Grocery's founder, tells the story of the sandwich's origin in her 1980 cookbook, Marie's Melting Pot:

Most of the farmers who sold their produce there were Sicilian. Every day they used to come of my father's grocery for lunch.

They would order some salami, some ham, a piece of cheese, a little olive salad, and either long braided Italian bread or round muffuletta bread. In typical Sicilian fashion they ate everything separately.

The farmers used to sit on crates or barrels and try to eat while precariously balancing their small trays covered with food on their knees. My father suggested that it would be easier for the farmers if he cut the bread and put everything on it like a sandwich; even if it was not typical Sicilian fashion.

He experimented and found that the ticker, braided Italian bread was too hard to bite but the softer round muffuletta was ideal for his sandwich. In very little time, the farmers came to merely ask for a "muffuletta" for their lunch.

Central Grocery is a big tourist attraction now.  What I really want to know is how the Muffuletta got its name.

Who created the first muffuletta is still a matter of dispute, but food critic and historian Gene Bourg uncovered a likely scenario. He interviewed elderly Sicilians who lived in the French Quarter for many years. "They told me vendors used to sell them on the streets, as did Italian groceries," he says. "The name refers to the shape of the bread. 'Muffuletta' means 'little muffin.' Italian bakers made muffuletta loaves and sold them to Italian delis. The delis then wrapped the sandwiches in the same paper the bread came in, so the sandwich took on the name."

I read that in a 2004 issue of Southern Living.  Makes sense.

Visit msnbc.com for breaking news, world news, and news about the economy
at 11:28 PM