This time for Africa? WAKA WAKA.

This is for Messy Marv.

I know the World Cup's over, and this probably applies to most Ummerkins: 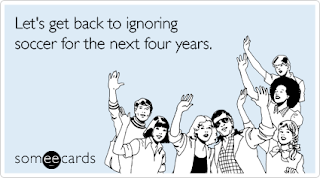 so I have to do this post quickly, before this song is forgotten completely.

I watched most of the World Cup games live on my Droid Incredible because I was at work during most of them.  I used VCast Videos and had the option of watching them in English or Spanish. As we all know, the Spanish speaking commentators are far more poetic and exciting that the stupid American ones, so I watched them all in Spanish. Before and after the games, this Waka Waka Shakira song played incessantly. --in Spanish. I later learned there is an English version, too.

What is this WAKA WAKA? Soungs pretty goofy. I sure freakin hope it means something to the South African people at least, and that it's not just Shakira's attempt at sounding African and making some fake shit up. That'd be dumb, and probably offensive, seeing as how there are countless African languages that sound lovely whose words she could have stolen from her song to be equally nonsensical to the listeners worldwide.

A quick Wiki search tells me Waka does mean something in a few languages, such as:


Whatever.  That doesn´t matter.
The refrain in her song (the part that is presumably African) says,

Turns out the lyrics are in a Cameroonian dialect called Fang, sampled from a Cameroonian song first recorded in 1986, called "Zangaléwa," that was hugely popular in Shakira's native Colombia, (not to mention all over Africa).

A great rallying cry, if I do say so myself.

Yeah, this song has been sampled a lot.  Here´s one clip.

"Zangaléwa" was recorded by a makossa group from Cameroon called Golden Sounds who were beloved throughout the continent for their silly dances and costumes. The song was such a hit for Golden Sounds that they eventually changed their name to Zangaléwa, too. The men in the group often dressed in military uniforms, wearing pith helmets and stuffing their clothes with pillows to appear like they had a swollen butts from riding the train and fat stomachs from eating too much. The song, music historians say, is a criticism of black military officers who were in league with whites to oppress their own people. Or at least, some of it was. Some of it, as far was we can surmise, is gibberish.

Shakira was brilliant for choosing to sample this song because it's both a tribute to African music, with the World Cup being held in South Africa, and a nod to the folks back home who've partied to this song since way back in 1987 when the song rose to prominence thanks to West African DJ's in Cartagena.


There was, of course, a bit of controversy about this song being the official World Cup song.  (To be honest, the last World Cup song I even remember was really Ricky Martin's The Cup of Life in 1998.)  The New York Times reports many South African people wanted it to be an African musician to do the song--but in my opinion, soccer is the world´s sport*--and it´s heart is really with Latin America.  Who better to represent Latin America--and the world!?--than Shakira?  I have no problem with her being the official chanteuse.  Besides, she did feature the South African musical group Freshlyground so no one can say a word about not including Africans, come on now.**

Some people also took issue with the lyrics themselves--the English ones (particularly the first verse).  Now this I do agree with, but on a bigger scale.  I know she always writes her songs [that end up being recorded in both languages] in Spanish first, and then she tries to come up with a translation into English for them.  I´ve got to say, I love Shakira´s lyrics in Spanish.  They are true and beautiful poetry.  BUT that just doesn´t translate very well, and I will be the first to say she sounds downright silly in A LOT of her English lyrics.  English is just not poetic enough of a langauge to be a supple host for her allusive lyrics.

My translation of them (obviously not fit for song rhythm):


Her translation for the English version of Waka Waka:


Yeah, so that may be a tad culturally insensitive.  African nations are always at war and stuff, and referring to these people as being good soldiers and being on the frontline with everyone watching... yeah, I guess it could have been worded better.

**Ricky Martin was--ahem--equally culturally inclusive in his anthem.  He, too, recorded the song in English and Spanish (yeah I like the Spanish lyrics better here, too.  He talks about having passion, heart, fighting for your star with honor, together, tu y yo!  The world is on it´s feet.  Here we go!) and since the World Cup was in France that year, he even had part of the refrain be in French!
Allez!  Allez!  Allez!

I stopped caring when you mentioned Wikipedia. Do yourself a favor and don't cite information from sources professionals automatically throw away (literally).

As a person who knows both Spanish and English I think you did a great job dissecting this piece. Don't listen to the guy saying bad stuff about Wikipedia since everyone uses it (professors from college, regular teachers, friends, and family) and as long at the info can be corroborated from other websites it's all good.

Probably one of the most ridiculous songs for it's usage, meaning and hilarious translation. Why should "this one be for Africa" anyways? lol. Waka waka hahahahahah