I was only going to post about Nahuatl (language) diminutive forms--or at most the "contact phenomena" between Nahuatl and Spanish, but I got to reading the wiki page and became fascinated--as I knew I would.

So I don't think you're incapable of reading the wiki yourself (http://en.wikipedia.org/wiki/Nahuatl)...
I just wanted to extract some of the things I found most interesting about Nahuatl linguistics.

My cousin told me once that the superlative suffixes -ote (m) and -ota (f) to imply physical largeness or intangible grandeur were only seen in Mexican Spanish. Same thing with -ito (m) and -ita (f) for diminutive forms.

I'm trying to figure out if this is true.

Reading around, I see references to -ton, -co and -tzing as diminutive form suffixes.
HOWEVER, Claudine Chamereau in her article "Morphology in Mesoamerican languages contacts" states that -ito and -ita were actually Spanish first and borrowed into Nahuatl. There goes that idea.*

Nahuatl is known for its prefixes and suffixes to better describe the root noun. Sometimes they double the first syllable of the root word to make it plural or to make it diminutive or as an honorific. e.g. /tla:katl/ "man" > /tla:tla:kah/ "men". Sometimes they do this just to emphasize the word. e.g. /kitta/ "he sees it", /kihitta/ "he looks at it repeatedly" and /ki:itta/ "he stares at it".

Sometimes all these affixes cause the word to be very long. For example, there is an 18-syllable word which means means “you honorable people might have come along banging your noses so as to make them bleed, but in fact you didn’t”.

Other interesting things about Nahuatl:

1. Nahuatl doesn't have case or gender. However, they do distinguish between animate and inanimate nouns. Interesting. Even then, only animate nouns can be made plural. Inanimate nous are considered uncountable. Apparently this is the same reason some words in English don't have different plural forms--words like "bread" and "money" are inanimate and uncountable in English. (Funny that they would use "money" as an uncountable nounn.)

Stand-alone pronouns are really just used for emphasis. Otherwise, they'd be attached to the word.

3. Over time, Nahuatl dialects have blended short and long vowels into new vowel sounds. Jaja. Some dialects also compensate for this with pitch varieties. Many modern dialects have also borrowed phonemes from Spanish, such as /b, d, g, f/.

They also used a kind of parallelism called difrasismo, which is when two phrases are symbolically combined to give a metaphorical reading. Some examples:

in xochitl, in cuicatl
"The flower, the song" – meaning "poetry"
in cuitlapilli, in atlapalli
"the tail, the wing" – meaning "the common people"
in toptli, in petlacalli
"the chest, the box" meaning "something secret"
in yollohtli, in eztli
"the heart, the blood" – meaning "cacao"
in iztlactli, in tenqualactli
"the drool, the spittle" – meaning "lies"

5. And of course, a lot of Spanish words got mixed into Nahuatl, seeing as how the Spaniards conquered the Aztecs and whatnot, but a few words got mixed backward--from Nahuatl back into Spanish. (For a full list, visit http://en.wikipedia.org/wiki/List_of_Spanish_words_of_Nahuatl_origin)
For instance:

The largest concentrations of Nahuatl speakers are found in the states of Puebla, Veracruz, Hidalgo, San Luis Potosí, and Guerrero. Significant populations are also found in Mexico State, Morelos, and the Federal District, with smaller communities in Michoacán and Durango. 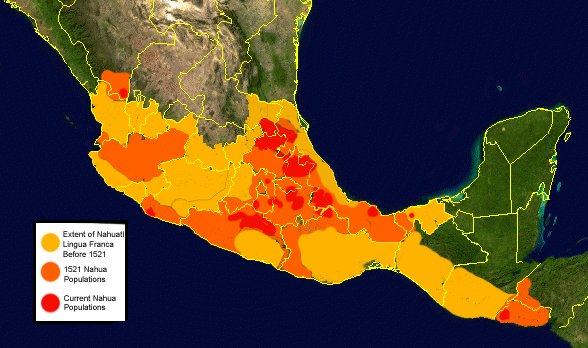 In Mexican slang, "chichi" is equivalent to "titties" in English. In Nahuatl, "chichi" means dog. The etymology shows that yes, this is how this came to be. Dog to bitch to titties, I guess. The curious part is that "chichi" is now also the slang term for breasts in French.

*Her article is actually pretty interesting concerning this topic. http://www.fb10.uni-bremen.de/morphcon/abstracts.aspx#Chamoreau
at 12:25 AM

I took a semester of Nahuatl at Tulane (they also offered Colonial Nahuatl and two dialects of Maya) and was constantly fascinated by what it taught me about what was possible inlanguage. The agglutinations, those endless prefixes and suffixes, seemed like they'd change the idea of poetry completely. Lots here that I didn't know!

I´ve been thinking about taking Nahuatl--because it sounds cool, but mostly to impress people when I go to Mexico--I just don´t think I have the time right now :( :(