My dad´s own linguistics curiosities 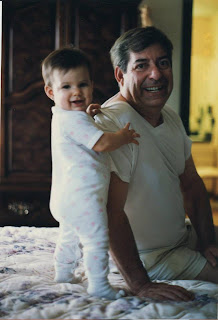 I have a friend, Brie (her blog is pretty great and you can read it here), who is a writer.  Not a bullshit write in my free time kind of writer; she´s a legit young professional writer whose articles are published and shit.  I think this is the coolest.

She recently asked me to be one of her 10 featured women in this article she was writing for MSN for Father´s Day.  The theme was "things I didn´t know about my dad until adulthood."  Now, since my dad passed away when I was 18, you can imagine I haven´t learned too much new information about him in my adulthood.  Pretty much everything I know about my dad I learned before I turned 18.

Well, so, I really wanted to be featured in Brie´s article, so I racked my brain... and of course a linguistic story came to mind.  Here is the link of where it was published http://glo.msn.com/relationships/what-i-never-knew-about-my-dad-9370.gallery (she had to shorten my peice), but here is the full text I wrote:

I grew up speaking both English and Spanish at home.  Even though both of my parents were Mexican immigrants to the US, when I was born my dad had been in the States far longer than my mom. When I was little, he would speak to me exclusively in English and my mom would speak to me exclusively in Spanish.  Not until I was about 5 or so did they decide to switch to Spanish-only at home (knowing I´d hear and practice English everywhere else I went)—and it was about that time that it dawned on me that my parents could understand each other.  All that time, in my child-mind, I assumed mom spoke one way and dad spoke another, and I had to keep the two ways of speech separate for their sake.  I clearly remember the day I noticed they spoke to each other in Spanish, and suddenly I knew all along the two languages had been for my sake—not theirs.

My dad was born in Veracruz, Mexico in 1932 and raised as the son of wealthy pineapple plantation owners.  At the ripe age of 14, he was shipped off to the US to receive an American education.  He taught himself English while in high school in Bay Saint Louis, Mississippi, and went on to further study at Loyola University here in New Orleans.  Once my dad discovered New Orleans, he was in love—the city, with its palm trees and music everywhere wooed him and reminded him of home.  He went on to become a successful entrepreneur and traveled the world, but he claimed New Orleans as home and lived here til the day he died.

Now, I wasn´t born until 1986—obviously my dad had been in the US a long time at this point.  He had been speaking English almost exclusively for years and years.  Not until he met and married my [Mexican] mom did he really start to use his native Spanish again regularly.  This lead to some very curious linguistic oddities burgeoning.  That is to say, he made words up sometimes.  Now don´t get me wrong, I know we all do this from time to time—looking for the perfect word, and instead of finding one, inventing one to suit our needs.  Except in the case of my dad, he said them so often, he´d forget they were part of his vernacular only, and to everyone else, he just sounded funny.  My mom was always quick to point out which words were wrong, as if to correct him—but really, he´d just laugh it off.  It was part of his charm.  She was really correcting him for my sake, lest his quirky words be passed on to me.

But somehow she missed one.

Apparently my mom thought it was obvious and didn’t need mentioning; my dad thought it was appropriate and continued using the word: piñaso.  He used it to mean a hit or a blow or a beating.  For instance, he´d watch boxing on TV “¡mira que piñaso le dio!” (“Look at how hard he hit him!”).  Now let me just say, the appropriate Spanish word to use here is golpe.  “mira que golpe le dio” would be acceptable.  Although I was aware of this word, I thought golpe and piñaso were synonyms, and, never having formally studied Spanish, I used piñaso all the time because it was familiar to me.

It´s almost embarrassing to say that not until very recently did I learn this was one of the words he had made up.  I had somehow never noticed the similarity between piñaso (what I thought was “blow”) and piña (“pineapple”).  My dad had literally made up a word to mean “beating so hard, as if with a pineapple” and I had used it all my life without the faintest clue that everyone who heard me thought it the oddest choice of words.  His pineapple-plantation roots had stayed with him throughout his life, and were linguistically passed on to me.

My father died of cancer in 2005, long before I made this linguistic discovery, but oh how I wish we could have shared a laugh about that one together.