Women have been compared to cats for a long time.  In ancient Egypt, people used to refer to their partners as cats.  A woman associated with a cat is usually a good thing, with one unfortunate exception, as we will see here. 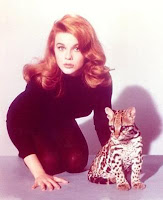 The term sex kitten was popularized in the 1950s, referring to Brigitte Bardot and Ann Margaret.  A sex kitten typically refers to a younger woman who is sexually provocative or aggressive.

There are countless examples of sexy catwomen; we can't forget Catwoman. Wanting to give his Batman comic books sex appeal and someone who could appeal to female readers as a female Batman, Kane and writer Bill Finger created a "friendly foe who committed crimes but was also a romantic interest in Batman's rather sterile life."

As for using cat imagery with their Catwoman, Batman's creator, Bob Kane states he and Bill Finger saw cats "were kind of the antithesis of bats."


"I felt that women were feline creatures and men were more like dogs. While dogs are faithful and friendly, cats are cool, detached, and unreliable. I felt much warmer with dogs around me--cats are as hard to understand as women are. Men feel more sure of themselves with a male friend than a woman. You always need to keep women at arm's length. We don't want anyone taking over our souls, and women have a habit of doing that. So there's a love-resentment thing with women. I guess women will feel that I'm being chauvinistic to speak this way, but I do feel that I've had better relationships with male friends than women. With women, once the romance is over, somehow they never remain my friends." 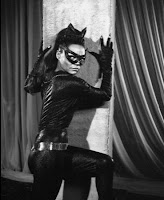 The term cougar was first seen on this website.  Cougar typically refers to a woman at least in her 40s who is sexually attracted to much younger men.  According to that website, a cougar in training who is in her 30s is called a puma and in her 20s is called a cougar cub.  (I didn't realize that in real-life feline terms, cougars and pumas are the same thing: puma, mountain lion, mountain cat, catamount and panther are all the same animal.  The name varies depending on the region.)  It seems that puma is accepted across-the-board as a term for cougars in training; however, according to some other sources, cub is often the term for the young man who is dating the cougar.*  This video explains the modern-day cougar pretty well. 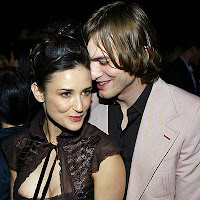 We even have the group of pop singers and dancers, the Pussycat Dolls.  This is obviously a reference to the crude slang pussy, referring to a woman's vagina.  I'm pretty sure this came from calling a woman a sex kitten or pussy cat--which eventually degenerated into the slang we have today. 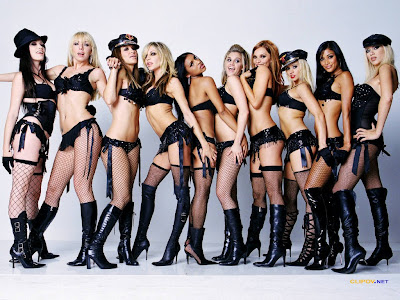 But what about the cat lady?!
The poor cat lady got the only bad cat-related reputation of the bunch.  See this video.  A cat lady is often a spinster who loves her cat.  Crazy cat lady is a pejorative term referring to a woman who hoardes cats and often cannot take care of them all properly.  According to that documentary, "these may be people who have a very hard time expressing themselves to other people. They may find the human need for affection is met most easily through a relationship with a pet." This devotion can sometimes signal mental or emotional issues such as depression.  According to the book, Outing the Cat Lady: Embracing your Feline Addiction with Style, you might be a cat lady if:
Chapter 1: You have ever actually exchanged money for a cat.
Chapter 2: Your several cats are all named "Kitty."
Chapter 3: Most of your wardrobe consists of cat-themed fleece.
Chapter 5: Even though you live alone, you require a king-size bed just for you and your cats. 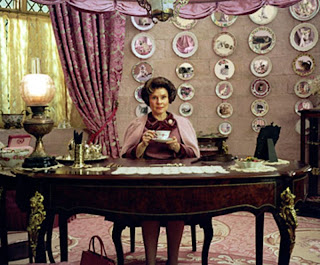 
*The animal equivalents for gay men seem less flattering, in my opinion.  A cub is still the young man dating someone older, in the gay community, the older man is the bear or the chicken-hawk.  Other variations include chicken queen and chicken plucker.  ugg.
at 9:38 AM

This is a really interesting post! but if you want to meet real ladies instead of just reading about them I would recommend http://passionsouls.com/ . It worked for me great! it is really easy to use.