So I told Ms. Chris about my blag and she had one pressing etymological question: Where does "butterfly" come from? I had never thought about it, but she had been wondering for years, apparently.

And then I realized, the word for butterfly is vastly different in every language I could think of off the top of my head.

The most likely origin of the English word seems to be

What about in other languages?

Off the top of my head:

French - Papillon - this actually comes from the Latin papilio meaning butterfly. Our English word pavilion comes from the same root... a canopy spread out like wings.

German - Schmetterling - from "Schmetten", an Upper Saxon dialect loan-word first used 16 & 17th C, from Czech "smetana", both meaning "cream", referring to butterflies' proclivity to hover around milkpails, butterchurns, etc. Folk belief had it that the butterflies were really witches out to steal the cream.
Tagfalter is another name for butterfly, perhaps meaning "day-hinge" or "day-folder", and Nachtfalter is a moth.

Italian - Farfalla - This also comes from the Latin. (Eventually I'm going to do a post about how p's became f's and f's became h's. ...later.) This is also the English word for those bow-tie pasta things that look like butterflies. 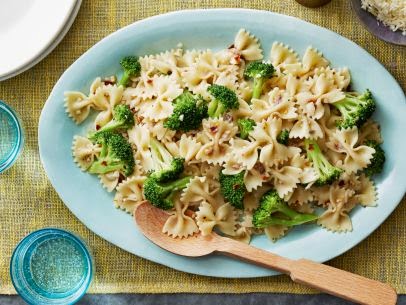 Notably, a few others:

from Andw:
So I received this FB message about an Under 40 Mixer for one of the mayoral candidates. It's a decent idea, I guess, for marketing to the young crowd-- but CHECK OUT THE WORDS THEY USE. It's awesome.
--Andrew

Email ThisBlogThis!Share to TwitterShare to FacebookShare to Pinterest
Labels: fbook

So I recently did a post about the Rejected Dwarf names, and today heard that good old Rudolph song on the radio, and got to wondering where these names came from?

You know Dasher and Dancer and Prancer and Vixen, Comet and Cupid and Donner and Blitzen. And we all recall the most famous reindeer of all: Rudolph

Are there any rejected reindeer names?!? YES!

But then in 1939, Robert May was working for Montgomery Ward Department Stores and he wrote a promotional holiday pamphlet that was given to 2 million customers. He penned a story of an underdog reindeer, taunted for a his abnormal nose, which glows bright red. Original name ideas, Rollo and Reginald, were rejected for being too cheerful and too British, respectively. (I hate British reindeer, too. I mean WHAT)

And so, Rudolph was born.

He didn't really become popular, though, until in 1949, Robert's brother-in-law, Johnny Marks wrote the song, "Rudolph the Red-Nosed Reindeer, " based on Robert's book. In 1948, on New York radio, Harry Brannon was the first person to sing this song. This was the year before Gene Autry recorded it in 1949. By 1950 it was the most popular Christmas song on the radio.

In the song, the phrase "All of the other reindeer" has been misinterpreted as "Olive the other
reindeer.” Olive is another fictional character that was created afterward. He's the most popular other reindeer, but for more, see this list.

What's the difference between "fact" and "factoid"?

facere means "to do" in Latin, like "faire" in French, "fare" in Italian, "fazer" in Portuguese or "hacer" in Spanish. (I'm working on a post RIGHT NOW about how f became h somewhere along the Latin to Spanish lines.)

FACTOID: an insignificant or trivial fact OR something fictitious or unsubstantiated that is presented as fact, devised esp. to gain publicity and accepted because of constant repetition
-OID is a suffix meaning “resembling,” “like,” used in the formation of adjectives and nouns (and often implying an incomplete or imperfect resemblance to what is indicated by the preceding element)

What?
Apparently, the number 5 in Thai is pronounced /hɑ/ so people typing type 555.

Khya has recently been hired by Target, and in a training he was learning about how to attend to handicapped aka handi-capable customers. I said, "capable is not the opposite of cap."
But then I got to thinking... maybe it is! What does "handicap" even mean? Where does this come from!?
In the dictionary, the very first definition of handicap is
I immediately thought of horse-racing, where the horses have to have a certain handicap put on them--which is an amount of weight they have to carry so that all the horses will weigh the same at the start of the race?? I don't know. No.
A handicap race is a horse race where horses carry different weights. A better horse will carry a heavier weight in order to make the race more fair. This allows for more skill in betting.
Handicap races are also common in clubs which encourage all levels of participants such as a swimming club or in cycling races as well. All the participants are clocked in a time trial before the races, known as the handicap. In the race itself, the participants don't start at go, but the starts are staggered based on the handicaps. The slowest swimmer/cyclist starts the earliest and the fastest starts the latest, making the end of the race really close. An ideal handicap race is one in which all participants finish at the same time. The one to win is the person that beats his/her own time. Isn't that a lovely concept?
Ok so does all this give us a better pointer as to where the word "handicap" actually came from? Yes.
In the 1600s there was a betting game with three participants. Two players and one referee. The two players would put some money into the pot--originally, a literal, physical cap/hat. Then they would put a valuable items up for betting and the referee would tell them how much money each must supply in order for their bets to be of equal value. NOW, the players had the option to either supply that money or not. They were basically calling each other's bluffs.
Both traders put their hands into the cap, and draw them out at the same time. An open hand is an agreement to trade and a closed hand is a refusal to trade. Hence the name of the game: hand-in-cap.
Handicapping thus became a term for leveling out the field by making the stronger contestant bear a penalty. A term which had made the jump from a game's name to 'way to equalize a contest' from there became synonymous with 'imposed impediment.' and then just 'impediment.'
So is "handi-capable" a more politically correct term than "handicapped"? I guess so... I guess you could even stretch the imagination and say yes, because one definition of cap is:
a limit, essentially. So, if someone is capped, they have limits, and you coulllllldddd say if they are capable then they are free of such limits...
stupid P.C. bullshit.
at 6:41 PM 2 comments: 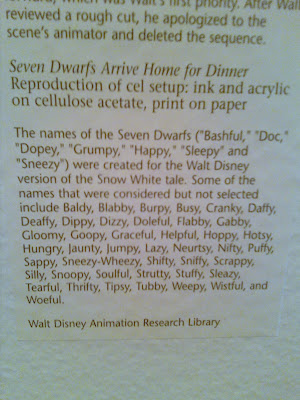 Helen, Andw and I went to the New Orleans Museum of Art's Disney's Dreams Come True exhibit today.
We came upon the dwarf names that were rejected for the Snow White and the Seven Dwarves.
WHAT DOES NEURTSY MEAN?! I have no idea.
All I can guess is that he's kind of neurotic.
Also, I really wish there had been a Sleazy dwarf.
at 11:57 PM 2 comments: