Where does my name come from!? 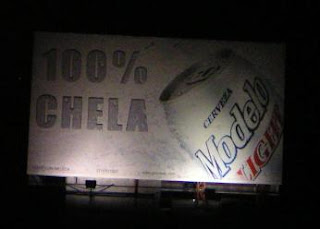 My name is Chela.  I've been asked a hundred bazillion times where my name comes from.  The answer's always the same. "It's a Spanish name, short for Graciela, which is the Spanish name for Grace.  It's actually my mom's name and my grandmother's too."  Sometimes I toss in some lagniappe, "it's actually a pretty common name in Spanish."  --and then if it happens to come up "you know what's funny?  In Mexico, Chela is a slang term for beer.  I don't know why."

I never bothered to look it up.  Until recently, I met this guy--I don't remember his name... I don't remember where he's from either.  But he's Hispanic!  And his skin tone is really light for being from--wherever he said he was from--and he told me his nickname is el Chele, which means blonde or fair.  And that reminded me someone along the way told me Chela really referred to light beer.  But in Mexico, anyway, it's used for beer across the board, from what I've gathered.  But then again, Mexican slang is nuts.

So I found out.  Go with me, here.
Cerveza means “beer” in Spanish, originally came from the medieval French word cervoise.  Derived from Latin, this was used in honor of Ceres, the Roman goddess of the harvest.  Before 1482, the inhabitants of the Iberian Peninsula had used the completely-unrelated ancient Iberian word ceria or celia, meaning "fermented wheat."  All I can do is infer that THIS is where Chela meaning beer came from.  And if it's wheat we're talking about, it makes sense for it to be light in color as opposed to dark.

I also remember from time to time that Prem would always tell me "Chela means disciple [in Hindi]."  I forget that one all the time but I think it's really great.  I did a little bit of research and found that to be a chela implies a peculiar degree of loyalty to one's chosen teacher and to the principles underlying his teachings. It also, and more particularly, implies a realization of the sacredness of the bond between the chela and his spiritual teacher.

They use the word chelaship almost interchangeably with discipleship, which sounds funny to me.  Almost as funny as JT regularly exclaiming CHELABULOUS!  Oh JT...


***
But wait!  The French call it biere not cervoise!
It is interesting to note that just about the time that the Spanish were adopting the term cerveza (aroung 1482), the French started to drop cervoise in favor of the term biere– from the Germanic term Bier (from the Latin biber, “to drink”), which was the term that was more popular in northern Europe, where the climate was more favorable to the production of the grains that were used to make the beverage.
at 2:14 AM

I love having a linguistically-curious pen-pal/blogger, Chela! Does "Chela' have any connection with the French word, "ciel," meaning 'sky'?

By the way, you should be sleeping at 2:00 AM, not blogging.

P.S. Exactly how many digits is "a hundred bazillion?"

Cerveza means “beer” in Spanish, originally came from the medieval French word cervoise. Derived from Latin, this was used in honor of Ceres, the Roman goddess of the harvest

Unfortunately, although you'll find this all over the web, it's rubbish: cerveza comes from the Latin cervisia (as does the French cervoise), which comes from the Gaulish word cuirm, which seems to be linked to words meaning "broth". Nothing to do with the goddess Ceres. See here for more …