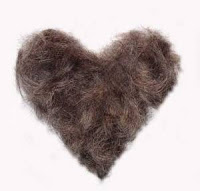 I  keep thinking of ways to celebrate the Fourth of July.  I feel like as long as we're still in July, it's still appropriate to celebrate.
Related to my previous post about Ummerka, I would be remiss if I didn't also include the definition of a merkin--as Dubya so graciously called us.
mer·kin /ˈmɜrkən/
–noun
false hair for the female pudenda
You can buy a merkin here.
I also happened across* the origin of


Yankee
first recorded in 1683, a name applied disparagingly by Dutch settlers in New Amsterdam (New York) to English colonists in neighboring Connecticut.
It may be from Dutch Janke, literally "Little John," diminuitive of common personal name Jan; or it may be from Jan Kes familiar form of "John Cornelius," or perhaps an alt. of Jan Kees, dial. variant of Jan Kaas, lit. "John Cheese," the generic nickname the Flemings used for Dutchmen.
It originally seems to have been applied insultingly to Dutch, especially freebooters, before they turned around and slapped it on the English.