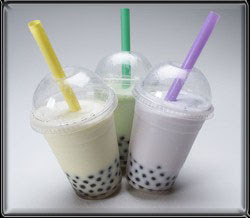 I first discovered bubble tea years ago with Freau at this delicious Vietnamese place here in New Orleans, called Frosty's.  She said it was like a fruit smoothie with tapioca balls in the bottom.  I tasted one and was intruiged by the chewy tapioca--and actually really liked it.  Then when I went off to college, Badass Coffee on the Strip turned into Wickles Wicked Bean and then to Strip Teas.  I can't remember which, but one of these claimed to have bubble tea, but they were "out of pearls" almost every time I asked for it.  I assumed the bubbles and the pearls were both actually the tapioca balls.

I skimmed over the history of bubble tea.  Looks like it originated in Taiwan in the 1980s and has become immensely popular in Taiwan and Hong Kong since then.  HOWEVER, it was originally just tea with different fruit flavors mixed in and shaken up.  The shaking made the bubbles, and it became known as bubble tea.  Not until the mid-80s were tapioca pearls added to the tea.  The tapioca pearls looked like bubbles, so this reinforced the already popular name.  But really, bubble tea can be bubble tea even if it doesn't have the pearls.

There are lots of different names for this drink all over the world.  Some interesting ones? 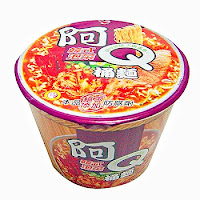 (Here are some noodles that are presumably al dente, or "chewy.")
But what about this word BOBA?!

I've read a couple of different things.
1.  As I suspected! BOBA - From the Chinese word 泡沫, which is in turn derived phonetically from the English word bubble.

How true are these?!?!  I used Khya's secret infallible tool, YellowBridge.

1.  This word,  泡沫, is actually pàomò--which doesn't really sound like "bubble" very much.  The first part, 泡 (pào) means to bubble, to foam, to blister, or to get off with [a sexual partner].  !  The second part, 沫 (mò) means foam, suds or froth.
This all sounds like a good name for what we've described as bubble tea, however, I'm still not convinced it's where we get BOBA from.

2.  Bō, 波 means wave, ripple, surge, storm.  Ok, I can see the stretch by which this could mean breasts.

Let's break it down further.  (Chinese is fun!)  Remember mò above? Put mò and bō and side by side.  沫 and 波.  The little front part that looks like a sideways Y with two eyelashes is common to both of them!  That part, 氵 means water!  It's the second part that's different in these two characters.  In mò, 末 means end, insignificant... which sounds right for making suds or foam.  Water + insignificant = froth.  Check.  In bō, the second part of the character, 皮 means skin, hide, fur or feather (basically any exterior of the body).  I'm not sure that water + skin = wave, but water + exterior could= wave or storm.

More importantly, if in the Chinese subconscious 波 denotes wave or surge but connotes skin, I definitely see how it could come to be slang for breasts.

So in this 2nd argument BOBA referring to breasts and milk and bubble tea, what does the BA mean?  This is just my guess but I found two possibilities.

Ding ding ding do we have a winner?!  I think so.
Bō (meaning storm but implying boobs/milk) + bá (drawn up by suction) must= bubble tea!

Unfortunately, you are not quite correct.
Boba really means "big breast".

You can put "波霸" in google image search, and you will believe me.

Nowadays in Taiwan, most the pearls in the bubble tea are large in size and are certainly called boba.