V is for Saturday 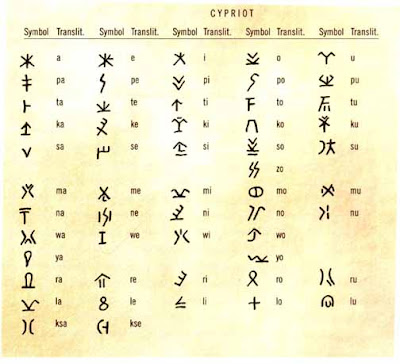 The other day Magee and I were talking via text message and he said something along the lines of "but they are closed on V", and I did not understand what he meant. I, personally use the standard university abbreviations for days of the week: MTWRF and I guess I used Sa and Su in my notes for weekend days.

He explained he uses MTWθFVS. θ makes sense for Thursday, S for Sunday.  I had no guesses about the V.  He explained he looked for a syllabary that had a simple solution, and found the Cypriot syllabary, in which a symbol that looks like a V represents the syllable "sa."

I came across this wonderfully comprehensive wobsite about writing systems, and started reading.  This stuff is endless.*

In terms of syllabaries, Maggs said his decision had come down to using the Cherokee "sa" which is a U with a horizontal line through the middle, or the Cree, which looks like a little chair.  I´m assuming he went with the Cypriot V because of it´s accessibility on a standard keyboard.  I think he made a good choice, considering the alternatives.  (Look here for a compilation of syllabaries.)

They say the Cypriot syllabary descended from Linear A and Linear B and was actually used for the Cypriot dialect of Greek between 800 and 200 BC.  In Linear A, "sa" was Y and in Linear B, "sa" was like Y but with two little tear drops on each side.  I was surprised he hadn´t chosen the Y from Linear A--seeing as how it´s equally easy to use as the Cypriot V, but it seems the origins of Linear A are too ambiguous for his note-taking standards.  Ok.

What he means is that even scholars today are unsure about Linear A and whether its decipherment is correct.  I mean, he´s right.  Linear A was used between 1800 and 1450 BC, and really, all they can do is start with what they know and go backward.  They think Linear B probably evolved from Linear A, but they don´t know how they´re related.  Furthermore, these linguists just assigned the same pronunciation that Linear B uses to characters that look similar in Linear A--but that was just guessing, too.  There´s no real consensus on Linear A.

Speaking of undecipherables, Linear A isn´t alone.  I mean, there are other really old things that are yet undeciphered (like Crete´s Phaistos Disc from 17th century BC seen on the left, and Proto- and Old Elamite used around 3000BC in Persia/modern Iran), but I feel like that makes sense, and is excusable.  They´re really old texts.

What is really weird to me is that there are a handful of relatively modern texts that are also undecipherable, namely:

It´s funny to me how vocabulary and grammar can change in a language so quickly, relatively speaking, and how it seems writing systems change so much more slowly.  If you think about the Latin alphabet for instance, the letter W was added to accommodate some German sounds in the Middle Ages, but that´s about it.  We don´t really see a lot of changes.  I guess since the printing press, and now keyboards worldwide, it would be much more difficult to create or destroy a letter than it is to create or destroy a word.

But it does happen sometimes!  I remember when I first started learning German, the teacher made some rules very clear about when to use ß and when to use ss.  --although we learned that ß = ss, the rule is:

Thus it helps to distinguish words like Buße (long vowel) 'penance, fine' and Busse (short vowel) 'buses'.  However, the teacher reluctantly informed us that ß is pretty much going out of style, not because of computer keyboards, but because of text messaging.  While computers made for Germany do have the ß key, cell phones do not, and kids are basically forgetting all about ß.

I also recently heard an article on PRI´s The World that Spanish has decided to get rid of two of their official letters.**  WHAT.  To the best of my knowledge, in addition to the 26 letters we see in English, Spanish claims/claimed 3 more: ch, ll, and ñ.  Now I´m hearing that the Royal Spanish Academy is getting rid of ch and ll as single letters, and my name will now be spelled C-H-E-L-A as opposed to the CH-E-L-A that I loved.

This is crazy.  My first initial is no longer Ch and now I must rethink my whole sense of self identity!  No, I´m just kidding, but Venezuela´s Hugo Chavez actually seems pretty upset about it.  I mean, he´s losing the first initial of his last name--I totally get it.  CNN reports:


If the academy no longer considers “ch” a separate letter, Mr. Chávez chortled to his cabinet, then he would henceforth be known simply as “Ávez.”

Now, of course people have suggested and created countless alternate writing systems throughout the years.  For instance, Benjamin Franklin took great interest in the promotion of spelling reform. See here and here. He proposed a more phonetic way of writing English, which actually makes a lot of sense, but no one seemed to listen.  The only person who really cared for this idea was Noah Webster.  Lol.

There are lots of other pretty writing systems, but my two favorites are: 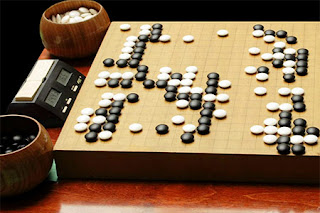 (For a good list of constructed scripts, see here.)  My cousin actually came up with a writing system, too, years ago.  It´s called something like AlienCode 2 Specific or something like that.  It´s by no means more efficient than the Latin Alphabet, and only a handful of people know about it.  I wonder if thousands of years from now someone will find a sample of it and wonder.  But then again, it´s probably very easy for cryptologists to decipher, seeing as how (with a few exceptions) there is one character per Latin letter.  It was fun when we were kids anyway, and is still convenient to know... hahaha.


*(Click here to check out the Yi syllabary.  It´s the largest standardized syllabary on record, and geez... things like this give me a lot of hope for humanity, to be honest, and man´s mental capacity.  If common, normal, run of the mill people can grow up using this writing system and mastering it, surely we are capable of great things.)

**Here´s the article with all the changes announced (but it´s in Spanish): El Pais 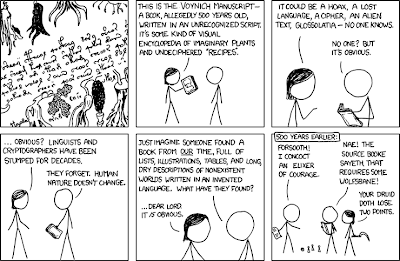 Writing systems are where it's at. Or perhaps I should say writing systems are "deshesit," which is the wonderfully slang-sounding word I have to type to prove that it's a human leaving this comment. No doubt the History of Writing class at Tulane will find its way into your next few years, yeah?

The Hungarian codex and the decision by the Spanish Academy were both news to me. Both hoaxes, perhaps? Maybe you'll wake up tomorrow and the nightmare of your altered initials will be over.

"It´s called something like AlienCode 2 Specific or something like that. It´s by no means more efficient than the Latin Alphabet, and only a handful of people know about it."

Does that include me?

How could I forget? I made it into a font for my computer so I can actually type in it if I want to. I emailed you at your gmail acct. The one that's your name. I didn't know the best way to get in touch with you.

"To the best of my knowledge, in addition to the 26 letters we see in English, Spanish claims/claimed 3 more: ch, ll, and ñ."