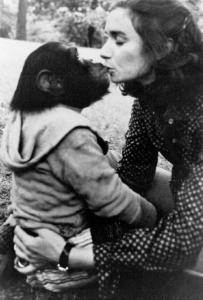 Ok, so you know I'm studying linguistics officially, right, and I'm in this Languages of the World (really like an intro to linguistics) course.  There are really interesting tidbits all the time--like on day 1, Nitzkin told us how humans are different from other animals in our ability to speak, and communicate about not only the concrete, but the abstract as well.

While other animals communicate to each other, this is generally done through instinctual sounds being made in response to some threat or stimulus.  Then perhaps other animals respond to that sound, instinctually.  There´s obviously no chatting involved.

But I was thinking about that awesome movie from my childhood, Project X (starring a very young Helen Hunt and an even younger Matthew Broderick), and about all those chimps that supposedly learned sign language.  What about them??

Well, I read this article on NPR about how humans are linguistically different from monkeys, and it says, first of all, monkeys´ vocal chords are shaped differently from those of humans, so they´ll never really be able to make the sounds we do--obviously--which is why scientists went on and gave sign language a go.  To summarize about the sign language obsession researchers had in the 60s and 70s, monkeys are smart enough to make certain shapes with their hands in response to certain stimuli (like twisting a fist by the corner of the mouth when shown an apple), but still, the number of words they learn seems to peak at about 300.

But by the end of high school, we have about 60,000 words, the average human. And every chimpanzee, bonobo, gorilla, they all sort of hit the wall at two to 300 words, which is also where a dog hits the wall, or a parrot. So there's something really different about us. And it's not to say they don't communicate - of course they communicate. And of course they have communication that can say very specific, surprising things, but it's not language. [...]  And what became clear to the researchers doing this was that the human infant had a language, a vocabulary explosion at a very young age that never occurs with chimps.

So Nitzkin was right in saying no monkey has ever spoken better than a 2 year old child. 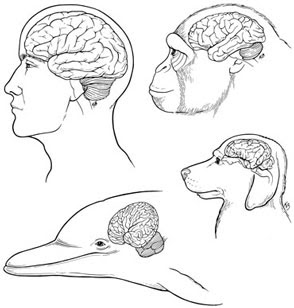 WHAT I DIDN´T KNOW is that although monkeys´ DNA matches like 97% of ours, cognitively, dolphins might be more similar to humans.  Studies show that dolphins are the only animals that can communicate about things not in their immediate surrounding, such as past and future events.*

I read on dolphin-world.com (that´s right) that dolphins have a greater brain-to-body-weight ratio than any other mammal besides homo sapiens and that because dolphins tend to stay within their own pods, they have trouble understanding “foreign” dolphins.  This might be an indicator that they have different dolphin "languages" in different parts of the world, even though they are the same species--if in fact they use language at all.

Well, anyway, it´s probably for the best animals don´t seem to really use language the way we do.  LEST THIS HAPPEN:


*Ok, I found this wobsite, and I can´t decide if it´s for real or not. It´s called SpeakDolphin.com, and well... they have a running list for if they ever do get to talk to dolphins, what are the questions they would ask.  Look.  You can submit yours here.
at 5:22 PM

Email ThisBlogThis!Share to TwitterShare to FacebookShare to Pinterest
Labels: animals

Do most of us really know 60,000 words by the time we finish high school? Wow. That seems like a lot. Do you mind telling me how you got that figure? I’m not disputing it—just wondering your source.

I hope you are enjoying your course! Thanks for keeping me on your mailing list. When you are rich and famous, I can tell people I know you.

That particular number came from the NPR article, http://www.npr.org/templates/story/story.php?storyId=130104043.

"Jon Cohen, our guest, is the author of "Almost Chimpanzee: Searching For What Makes Us Human, In Rainforests, Labs, Sanctuaries, and Zoos." He's also a correspondent for Science Magazine. He joins us from a studio in San Diego. Welcome back to SCIENCE FRIDAY, Jon."


However I also came across this wobsite http://www.balancedreading.com/vocabulary.html, that seems semi-legit, and there, Dr. Wren says

"It is reasonable to say, then, that a literate adult knows somewhere around 50,000 words, if you count DRIVE, DRIVER, and DRIVES as separate words. But as I said, literacy and volume of reading is highly correlated with vocabulary size (e.g. Nagy and Anderson, 1984), so an adult that does not read habitually would have a much smaller vocabulary than an adult that reads voluminously. Nagy and Anderson (1984) estimated that an average high school senior knows 45,000 words, but other researchers have estimated that the number is much closer to 17,000 words (D'Anna, Zechmeister, & Hall, 1991) or 5,000 words (Hirsh & Nation, 1992). Surely these dramatically different estimates depend upon the three questions described above, namely, what does it mean to "know" a word, what counts as a "word," and who counts as "average?""

Thanks for taking the time to track down some numbers regarding vocabulary size, Chela. Me? I would count “drive” and “drives” as one word. “Driver” would be separate. And so on.

That's a tough question-- on the one hand, you could consider by parts of speech, but then "drive" the verb and "drive" the noun become two separate entries-- and a separate entry for each definition of it-- and "driving" as a gerund serves multiple roles. And then do you count "driving range," which is a single semantic unit that cannot be considered the sum of its parts, as a word?