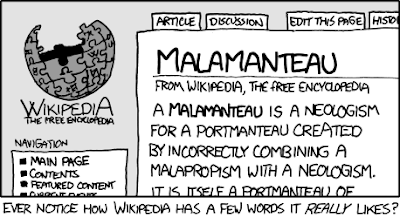 So: Is malamanteau a “real” word? It may depend on what you consider real — does a word’s “realness” comes from its use, or from its pedigree? For some, malamanteau will only become real when it’s used, unconsciously, by someone who’s never heard of xkcd. Every old word was a new word once, and at some point “silly word prank” may yet turn into “etymology.” It’s possible that day will never come, but until then, I say, if it acts like a word, we might as well let it be one.
at 5:52 PM

Words, words, words all you ever talk with are words!!

I get my info from all over the interbutts!