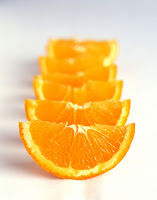 So Khya and I work on basic Spanish throughout the day, and it was called to my attention how strange the word "anaranjado" is.  In Spanish, NARANJA means orange (fruit), and in some countries they use the same word for the adjective (color), but in Mexico, the color is ANARANJADO which could be literally translated to "oranged."  It's the past tense verb form of orange, as if "to orange" were a verb, but it's not, really.

My Honduran co-worker also says anaranjado for the color; my Cuban co-worker didn't know how to say orange in Spanish and my El Salvadorian co-worker says naranja.

The funny thing is that no other color name is in that past-tense verb form.  But then again, none of those words double in meaning for some other noun.  In fact, if you do see a color word in that verb form, it means a derivation of that color.  For instance, azulado from azul connotes "bluish."  I also found blancuzco from blanco, verdáceo from verde and violáceo from violeta--but I've never heard those used in real life.

My best guess is that we only use the different form for the color orange to differentiate it from the noun.

I did some research.  We have Orange in English, French and German; Naranja in Spanish; Arancia in Italian and Laranja in Portuguese.  Where does this word even come from?

I got the following from that same Etymologically Speaking guy.  Like I said before, some of his stuff sounds outlandish, but everything I double checked elsewhere was in fact, true.  However, this I can't seem to find any support for, except that he himself has been quoted countless times all over the interbutt.*

Interestingly, none of these terms come from the Latin word for orange, citrus aurentium; instead, they all come from the ancient Sanskrit naga ranga, which literally means "fatal indigestion for elephants."


In certain traditions the orange, not the apple, is the fruit responsible for original sin. 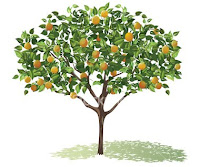 There was an ancient Malay fable--which made its way into the Sanskrit tongue around the Seventh or Eighth Centuries B.C.--that links the orange to the sin of gluttony** and has an elephant as the culprit. Apparently, one day an elephant was passing through the forest, when he found a tree unknown to him in a clearing, bowed downward by its weight of beautiful, tempting oranges; as a result, the elephant ate so many that he burst. Many years later a man stumbled upon the scene and noticed the fossilized remains of the elephant with many orange trees growing from what had been its stomach. The man then exclaimed, "Amazing! What a naga ranga (fatal indigestion for elephants)!"

*Bradshaw of the Future seems to think it's false, but his jump from pume orenge to melarancio presents a problem for me.  That particular jump is the key, but I see no support for it. 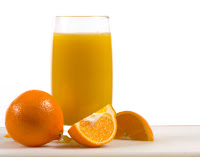 **Now this I do believe--oranges being the sinful fruits in cultural myths.  Here's why: it's probably a translation issue.  In many languages, oranges are, implicitly or explicitly, referred to as a type of apple, specifically a golden apple or a Chinese apple.

For example, the Greek χρυσομηλιά (chrysomelia) and Latin pomum aurantium both literally describe oranges as golden apples. In other languages like German, Finnish, Polish, or Russian the terms for the bitter orange (a related species) are derived from Latin pomum aurantium. Additionally, the Hebrew word תפוז (tapuz) is a shortened form of תפוח זהב (tapuakh zahav), or golden apple.

It's not my jump, it's the OED's jump. It's also in the American Heritage Dictionary. To be clear, it's the "orenge" part of the French word that is probably borrowed from Italian "arancio".