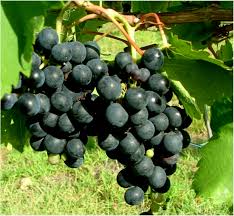 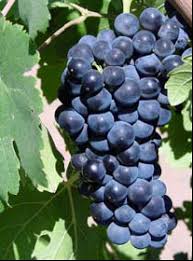 A few months back, my cousin and I were discussing how much we like red wine but don't know much about it. He likes to try lots of different kinds--and recently discovered he likes Petite Syrah wine.
He saw it on a wine list, and because his girlfriend's name is Sarah, he thought it cute to get a wine "named after her." Turns out, it is delicious.

What I do know is that wine names like Merlot or Cabernet Sauvignon or Pinot Grigiot are all grape varieties. Further names are going to be brand names. Petite Syrah is also a grape variety, just a less common one.

I had Petite Syrah that one time in Mexico, and since then, have had trouble finding it. I saw Petite Sirah once and I see Shiraz all over the place and wonder if that's related to Syrah--and how different that is from Petite Syrah. Soooo let's blog to find out.

Shiraz
is actually a large city in Iran--where the oldest wine samples ever discovered were. They've been making wine in Shiraz for over 7000 years.

Syrah
is a grape variety, also known as Shiraz, that has grown in France for many centuries, and more recently, also in Australia. It's called Syrah in Europe, Argentina, Chile, Uruguay and the United States. In Australia, South Africa and Canada it's more commonly known as Shiraz. But it is, in fact, the same grape.*

Where the grape originated before it was in France is hard to say. People speculate it came from Shiraz, Iran--but there are other ideas, too.**

We definitely know how it got to Australia: In 1831, the Scotsman James Busby, often called "the Father of Australian viticulture", cut samples of it from Europe and brought it back to Australia. The plant was an established Australian variety by the 1860s.

Shiraz and Syrah are in fact the same grape, but it seems the nomenclature has varied implications, anyway:

None of this mentions Petite Syrah or Petite Sirah. Turns out that's a different grape variety all together. The grape is actually called Durif, which came from crossing the Syrah and Peloursin grapes, which didn't happen until the 1880s. California and Australia are now the two leading producers of Durif. The grape can also be found in Israel, Brazil, Argentina, Chile, and Mexico.

According to wiki, compared to Syrah, [Petite Sirah] wine is noticeably more dark and purplish in color, and typically rounder and fuller in the mouth, and offers a brightness that Syrah lacks.

**Another legend of the grape variety's origin, based on the name Syrah, is that it was brought from Syracuse by the legions of Roman Emperor Probus sometime after AD 280. This legend also lacks documentary evidence and is inconsistent with ampelographic findings.
at 10:18 PM

Email ThisBlogThis!Share to TwitterShare to FacebookShare to Pinterest
Labels: wine